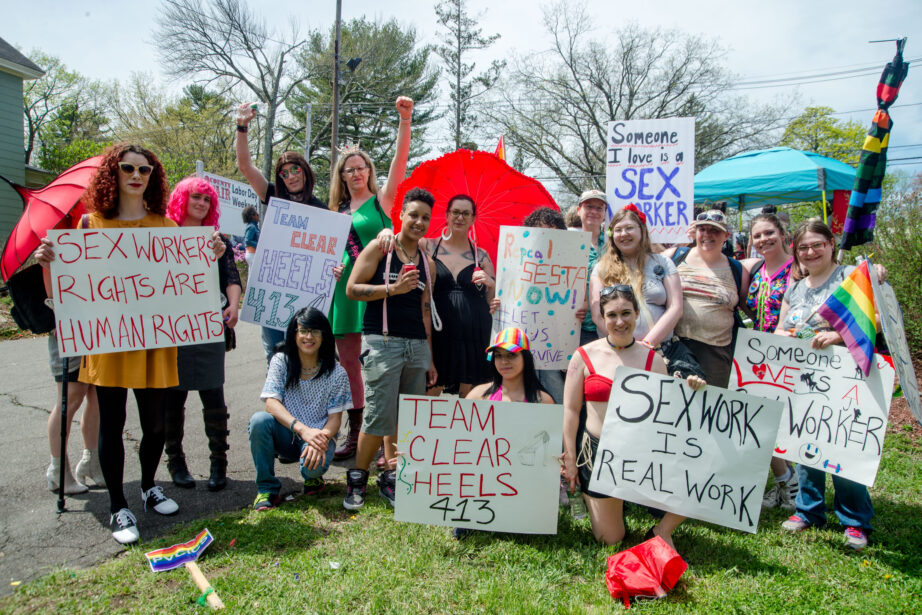 Supporting Sex Workers is a Radical Act of Queer Pride

Editor’s Note: This is truly an important summer, one we will remember for reviving civil rights activism and bringing to levels we’ve never experienced before, a sense of urgency and action. We are thankful, and wanted to create a little space for pride to be celebrated, in July. This was written in early May to archive a few of Bella’s personal experiences as a Western Mass queer. Pride is the annual marking of the night that gay, lesbian, and trans folks – forced into dangerous situations by police, said enough is enough. We are Proud of being Queer, We Belong Here. Bella asks us to not forget what this means. We honor those that bashed back, who protected themselves so that we could know what that looks like, those who threw stones in self-defense and taught us how to fight back. I hope you all celebrated amidst our struggles in the best ways you know how. We miss you, we love you, we have more for you soon. – Courtney Trouble, for QueerPorn.TV

Supporting Sex Workers is a Radical Act of Queer Pride

It’s 2020 and the world is like a scary episode of some well known sci fi series you might be bingewatching currently.  We don’t need to get into that.

The news is literally filled with new atrocities everyday and staggering numbers we can’t begin to wrap our minds around.  We don’t need to get into that.

I won’t write a new piece about the origins of pride, there’s lots of those that exist already. Here’s a good one posted by SWOP USA.

What we do need to get into though are some thoughts and actions and realities so we don’t lose sight of where we are in time.

Most public pride parades were cancelled months ago, I didn’t see any major pushback in the queer community; We seemed to collectively understand that was the safest thing possible, even if it made some of us sad, even depressed. “Social distancing” for so many of us, where our queer identity intersects with disability, where we come from small rural towns and being alone alot and not feeling connected, has become a way of life.

When it comes to calls to action and public health, maybe the LGBTQIA+ community has more experience than cishets in general?

For some of us it isn’t the first pandemic we have lived through.  For others we’ve heard stories passed down from the elders in our community who survived and witnessed the AIDS pandemic. Which disapropiriately killed our own queer community, and particularly gay and bi men, Black people and sex workers.

We have survival skills.

As much as we want to frolic in the streets screaming with joy and solidarity, spreading glitter, kissing strangers and celebrating each other, now is not the time.

In lots of cities nationwide pride has been turned into a for-profit marketing and merchandising machine that completely loses sight of the roots of the reasons for celebration. Most Pride parades don’t organize much to give back anything to or even give a voice to, queer sex workers.

It leads to many of us feeling alienated and invisible in a time that should  celebrate and uplift us.

As a result of all that I have mostly felt pretty disconnected from Pride events, and as a antisocial person in general being in large crowds in hot sun is not usually much fun for Me.

It can never be said enough that “Pride” was started by trans sex workers of color.

DO not erase them, do not forget them.

Do not forget the reason we all come together to celebrate our diversity and freedom.

In My area of western MA the big Pride event is in Northampton, MA.  Noho as it is lovingly called is a college town, and is also ranked in top five and in many lists number one cities for lesbians.  It’s grown and changed over the years, been gentrified and in some ways diversified, and still remains to have a high population of queers.  College educated queers.  Older queer families that make enough money to live that that particular pricey area of western MA.  Our Pride event is held in May, weeks and weeks earlier than the rest of the country and the reason for that is so that the city can include the multitude of college students in with the festivities.

I am happy that our local Pride is not super corporate and has actual members of the queer community deciding what goes on and how things are run and doing the actual fundraising.

Our Pride is however, SUPER family friendly and G-rated.  It gets a lot of flack for it actually.  I understand organizers are simply trying to include as many people as possible.

We have a wonderful and fair amount of great queer organizations that proudly march.  And of course a whole lot of allies and schools and churches and other places like that that want us to know that they are accepting of queers and they welcome us.

I have never seen sex workers specifically march during a western MA Pride, and if I am wrong about that, I would be extremely happy!

I approached a few years ago asking if TeamClearHeels413, a collective of current and former strippers living and working in the Western MA area would be welcomed to march.  I was pretty astounded when the answer was YES!

I did not want to lose sight of the origins of the occasion.  The first year we got to march SESTA/FOSTA had JUST passed and we all marched loud and proud for sex workers rights.

We held signs calling for the repeal of SESTA, telling folks that to support lgbtq issues you must also support sex workers.  We yelled it and I mean yelled it.

We were lead by Lorelei Erisis, Miss Trans New England as well as a stand up comedian and local activist.  She has a background in theater and alot of control over her voice and was just SO LOUD, projecting her voice, leading us all in chanting SEX WORK IS REAL WORK SEX WORK IS REAL WORK.

It felt like we had brought back some power to this little small town pride celebration and it felt like anything was possible.  People from the crowd were joining in off the streets to march with us. A person with tears in their eyes took a moment to thank us for existing and being so visible.  All these little powerful experiences were happening. Lots of kids there who asked their parents what a sex worker was over dinner, lots of room for education and improvement. We weren’t just nameless faceless bodies hunched over cars open windows in a hastily put together magazine article.

We were living, breathing humans from their very own tiny community!  Confronting them!  Saying we are here!

We are queers we are part of your community.

We even made it on the cover of the Valley Advocate.  People in our community were discussing sex workers rights.  It was a cover story…and we even talked them out of using one of those nameless, faceless sex workers leaning over into a car images and to instead include images of US actually marching. That was our first official year as Sex Workers at this Pride Parade.

The next year we marched Lorelei led us again because it felt wrong to do it without her and how could anyone even begin to match the sheer force that is Lorelei Erisis.

SESTA/FOSTA still ruining the lives of sex workers everywhere we still screamed for the repeal of this horrible law.  We called for the dismantling of the whorearchy, for the separation of sex work from sex trafficking, and for rights not rescue. We had an afterparty at the stripclub where fat femmes naked bodies were celebrated and folks of all persuasions threw money in support.

We looked damn good doing it. Everything seemed aligned.

I was so excited to do it all over again this year.  We had pre pre pre planned and even had dates and rain dates for times to get together to make signs to hold and decide on chants this year.  Already printed our flyers talking about who we are and what we need and ways folks can support their local sex workers.

It became really clear that we wouldn’t be gathering and handing anything out to anyone. There was a mad rush to re-organize our funds and time and efforts.  All of the sudden all strippers were out of work and in need in so many ways. We blew through our budget for the year in the first month just feeding families and then fundraised for more and blew through that feeding more people and organizing free masks.

So here’s what you CAN do to honor pride this year.

Support, signal boost, retweet, repost, follow, like and GIVE MONEY to Black led sex worker organizations.  There are specific organizations that are led by trans woman of color and they need funds!

Let your fanbase know what is important to you and that we need to be HUMAN right now.

We need to include sex workers in pride this year and every year.

It has been beautiful to Me to watch the queer community rally for Black Lives Matter movement and march in solidarity during Pride month. The NYC Pride Parade turned into a Black Trans Lives Matter protest and THAT is the energy we need to keep going forward. Yes, we have PRIDE in our sexuality, pride in our orientation, pride in our community, and most of all pride that we can come together for movements that really matter

Here are some really wonderful organizations you can donate to not just for Pride, but every day, every week every month. Make supporting and uplifting Black led sex worker organizations part of your daily norm. Work it into your finances.

“Point Source Youth is particularly committed to supporting sex workers because of our commitment to supporting the most marginalized members of the LGBTQ and queer communities, including youth of color and youth who aren’t stably housed — all of whom participate at a higher rate as sex workers, often for survival.”